August 6th is National Gossip Day. While the bizarre holiday focuses on the act of spreading information about another… a question lingers… when does it became harmful? Can someone be sued over gossiping? 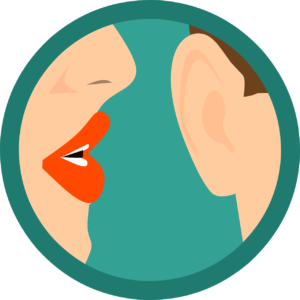 It varies depending on the type of people, for instance, if a celebrity (i.e., public figure) were suing for defamation, the public figure would have to also show the speaker acted with “actual malice” when making the statement. Conversely, a private citizen only has to prove that the defamatory statement was made negligently, and the speaker did not act with “reasonable care.”

In Texas, defamation occurs when a person makes a false statement, knowing it may cause harm to a person’s reputation or company. Examples would include accusations of moral turpitude, criminality, and allegations involving a loathsome disease. There are two types of defamation in Texas, defamation per se and per quod.
• Per Se: This is when the statement is defamation “by itself.” The defamed party doesn’t have to prove injury or monetary loss, for example, if the defamed party’s reputation was harmed. The law presumes certain categories of statements as defamatory per se, including statements that (1) unambiguously charge a crime, dishonesty, fraud, rascality, or general depravity, or (2) that are falsehoods that injure on in their office, business, profession, or occupation.
• Per Quod: The defamed party is required to prove how the statement cause material harm. Essentially, the defamed person must prove how the statements made by another were false, defamatory, and injurious to the defamed person. The determination as to whether the statement made is defamatory is based on the circumstances surrounding the statement. This is very fact specific.

One example of a Texas defamation case is by a couple in Clarksville who filed a lawsuit against an anonymous post on an internet forum. The commenters accused the couple of being sexual deviants, molesters and drug dealers. The couple was awarded $13.78 million after proving the damages they experienced from the false claims.

While gossiping may not always be harmful, sometimes it can cross the line and become defamation. These statements can be harmful and detrimental to one’s career or reputation. If you have been accused of defamation, or someone has defamed you, contact the Martin Law Firm to help break down the specifics of a situation and determine a claim.